Nineteen years ago GIA published the results of a human experiment in the observation of diamonds with various amounts of blue fluorescence. An introductory editorial indicated that this study “should bring into question the trade’s lower “bid” prices for moderate to highly fluorescent diamonds in the better colors”. 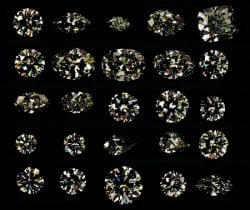 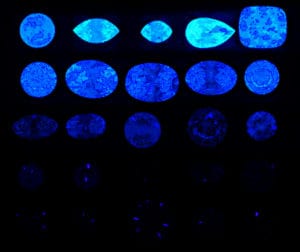 2. 25-Diamond Data Base in Long Wave Ultraviolet “black-light” illumination. There are 5 rows of five diamonds with the five fluorescent strengths of None, Faint, Medium, Strong, and Very Strong blue fluorescence

There are several reasons for the concern and distrust by consumers and the trade of these gemstones that glow blue when excited in the dark by ultra violet (UV) radiation, Figure 2. The reasons are mostly due to misinformation and misguided publicity except for one valid concern. That is the overgrading of color that according to members of the diamond trade is too often observed. Overgrading results from the use of UV-containing, fluorescent lighting in color grading. …..Read full article here.